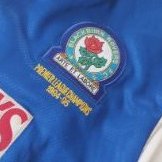 So was your post. The equivalent of posting "Peter Whittingham was shit" (which, if we are being honest, he was for Rovers) an hour after his death was announced.  Absolutely no need for it. And