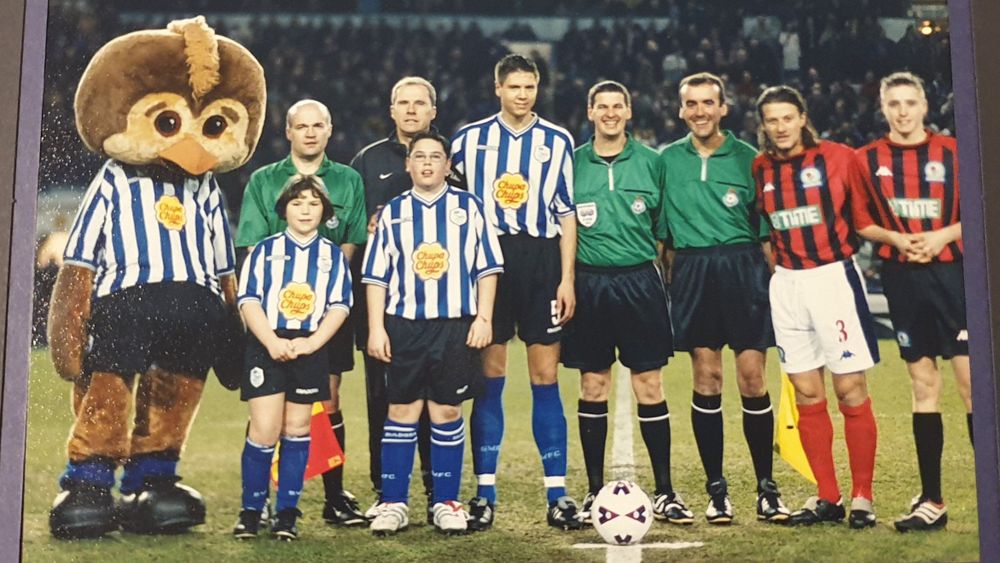 Confessions of a Teenage Mascot

A record of eight appearances in just over a decade is the kind of form only Vince Grella would be proud of; but for a fan appearing as the team’s mascot, I’m pretty proud of my appearance record. The problem is, in those 10+ years, we only managed a record of one win, one draw, and six losses; and this covered a period when we won promotion from the Second Division, and won the Premier League.

I have run out on to the pitch with the likes of Colin Hendry and Alan Shearer, and despatched daisy-cutters in Tim Flowers and Bobby Mimms. I have shared dressing rooms and Truprint camera negatives with the likes of Rovers’ first million-pound player, a domestic transfer record breaker, the most expensive goalkeeper in the world at the time, a local hero, and Uncle Jack.

For every Shearer there has been an Ashley Ward; for every Flowers an Alan Fettis; for every Hendry an Oumar Konde; and for every Lee Carsley, just Lee Carsley.

Making my debut, I was on the pitch for the start of Kenny Dalglish’s reign with a 2–1 defeat to Glenn Hoddle’s Swindon Town at the County Ground – surely with King Kenny at the helm, it could only be a matter of time before I was on a winning side.

Think again, I was as unlucky as a Rovers away shirt with the Premier League winners badge sewn in to the fabric. Defeat away to Leeds in 92/93 (5–2) followed. Even when we won the league, an away day defeat to eventual 7th place Spurs was confirmed when I won the Junior Rovers away coach raffle on the way back from Crystal Palace on New Year’s Eve – it’s a wonder my Dad continued to buy me raffle tickets. To add insult to injury, even Darren Sicknote scored against us.

We lost at Bolton away the following season, when, after my pre-match escapades, I had to watch the game stood on a polystyrene box in the uncovered away end at Burnden Park, in the pouring rain – it’s the only time I’ve ever wished I could go in a Co-op instead of a football match.

Newcastle and Everton were awarded the points at home in 96/97 and 97/98 after I darkened the dressing room. I’m fairly certain if I’d ask Uncle Jack how much he’d pay me to never buy a raffle ticket again, I’d have been set for life. What money can’t buy though is the smell of deep heat, hearing the latest R&B blaring out of a ghetto blaster, or seeing the questionable hairstyles – I’m looking at you Damien Duff.

At the Valley in May 1999, the stakes could not have been higher – four games left to play, with a game in hand, and starting away to the team making up the last relegation place, Charlton, beneath us on goal difference. Despite unquestionably the most blatant penalty never given for a clear foul on Ashley Ward by the Charlton keeper Andy Petterson, I was pleased that I had broken the run and finally got away with something other than a defeat. It’s only now when I look back that I realise the significance of the point I thought I’d won – we were relegated by 6 points; who knows if we’d got that winner we would have had the momentum to beat Forest at home in the next game, Ashley Ward would have put that shot away against United, and we might’ve stayed up on goal difference.

I didn’t take relegation well, and at the experienced mascot age of 12, I thought it was time to hang up the Kodak and cancel the Truprint membership. Coincidentally, this hiatus coincided with promotion in 2000/01 and a positive start upon our return to the Premier League and qualifying for a League Cup semi-final by the end of 2001.

If I’m being honest, I hadn’t even considered coming out of retirement to mascot on the big stage at this point – I was preparing for my GCSEs and playing every Sunday – the last thing I was thinking of was running on to the pitch holding hands with the original injunction-man Garry Flitcroft. That may even have been a bigger scandal than the one which broke later that year (remember the “Garry Flitcroft is magic, he wears a magic hat, and when he saw a pole dancer he said I’m s******g that” chants at Leicester away when he was named in the national press?!)

What I hadn’t factored for was my father. At the age of 41 (and still involved with Junior Rovers), and having waved me off every morning to catch the school bus, he thought it would be acceptable to volunteer me to be mascot at Hillsborough on Tuesday 8th January 2002 in a League Cup semi-final in front of 30,883 people, some of whom I went to school with, in a game that would be broadcast on national television.

There are two things I admire about Dad’s decision – the first was his trust in the knowledge that even at age 15 I wouldn’t say no to him or to Blackburn Rovers; and more importantly, his faith that I could end the mascot hoodoo. He asked, and of course I said yes – although it did take a bit of sweetening with words along the lines of “you never know when we’ll get back to a semi-final”. I suppose I should think myself lucky he didn’t pimp me out at Old Trafford in 2007 against Chelsea at the age of 20.

Well aware of the fact I was due to be ridiculed for eternity, I donned my red and black stripes, green Lotto boots (not wanting to draw too much attention to myself) and headed for the Players’ Entrance.

Unlike previous experiences, instead of being nervous, this time I was terrified. I didn’t run to the dressing room to meet my heroes – in the squad that day was Tiny Taylor, just six years my senior. I didn’t ask for any photographs, I just stood in the tunnel, psyching myself up for the first leg of a major semi-final, and the prospect of running out holding Tugay’s hand.

They say you should never meet your heroes, but in this instance I forgive Tugay for being silently confused and ashamed of me. I was taller than him by a good two inches. Very few, if any, words were spoken between us, and then it was time to run out. Only he didn’t run out and hold my hand, or even run out beside me, he took the lead and I slotted in behind him, making me look like our 12th man.

On the pitch I didn’t bother imitating the stretches the players were doing this time like I had when I was five – I just wandered around the pitch trying not to be noticed. I had my photograph with Tugay and then in the centre circle with the referee and assistants, before sloping off to the touchline and back to my seat. Perhaps the saving grace for me that night was that we were wearing our home shorts with the away shirt and socks. Having not received the memo from the gaffer, I was in the traditional black shorts, or else Souey might have been tempted to leave me on and demote Alan Mahon to the stands.

As expected the next day was full of ridicule from school mates, although as we’d spent some time in the First Division, a lot of the other kids had taken to following Manchester United and Liverpool again, so at least some of my misery was spared. I was actually pretty proud to have broken my duck, and was sticking by my retort of “how many of you have been a mascot in a major semi-final?” whenever mocked.

The comedy of the whole situation reached new heights after we confirmed our place in the final, and I was asked, along with other supporters, to do an interview in Blues Bar for the matchday programme. Of course I obliged, and as the competition was sponsored by Worthington’s that year, we were given two complimentary pints – I wonder how many times a mascot in a semi-final is provided with booze before the final?

After 10 years I had finally broken my duck and I’m pleased to say I have since hung up my autograph book and camera (I can still be found searching for retweets on Twitter though), and I am definitely proud to say that I was the mascot the last time Rovers won away in a cup semi-final. As for my Dad, he might have volunteered me to lead the team out at 15, but I’ll always have the last laugh – he was the original Artey, the life-size Rovers badge parading blindly around Ewood Park with Shearer and Sutton taking potshots at him – I’ll never beat that.